Eurojust President Mr Ladislav Hamran and Albanian Prosecutor General Mr Olsian Çela opened the Office of the Liaison Prosecutor for Albania at the Agency today. The opening follows the start of Ms Fatjona Memcaj as the first Albanian Liaison Prosecutor at Eurojust in January of this year.

Albanian Prosecutor General Mr Olsian Çela said: ‘Our strengthened cooperation through Eurojust marks an important step forward in the fight against all types of crime, which transcend our borders. The path we have taken will enable us to consolidate experiences and capacities as well as to increase the cohesion of our organised institutional response to the serious threat that transnational organised crime is posing to our societies.‘

Eurojust President Mr Ladislav Hamran stated: ‘Being close neighbours, the European Union and Albania are natural partners. At Eurojust, we know from experience that having a Liaison Prosecutor with us acts as a strong driver to strengthen judicial cooperation across borders. I am therefore grateful to the Albanian authorities for their collaboration in opening the Liaison Prosecutor’s Office, and I look forward to better fighting serious cross-border crime together.‘

The ceremony was also attended by Mr Arben Kraja, Chief Prosecutor at the Special Prosecution Office in charge of Organised Crime and Corruption Cases. The opening of the Office coincided with the first evaluation meeting on the cooperation agreement with Albania, which entered into force in 2019. The appointment of Ms Memcaj is a direct result of this agreement.

Cross-border judicial cooperation between Albania and Eurojust has risen by over 40% in the last five years. Between 2016 and 2020, a total of 84 cases with Albanian involvement was registered at Eurojust. So far this year, 20 cases have already been registered, with a long-term investigation culminating in the arrest of 38 Albanian drug smugglers in cooperation with Italy in July, which is one of the most successful examples of this cooperation up to now.

Currently, apart from Albania, nine other countries have Liaison Prosecutors at Eurojust: Georgia, Montenegro, North Macedonia, Norway, Serbia, Switzerland, Ukraine, the United Kingdom and the United States. Ms Memcaj has extensive experience in cross-border judicial cooperation, and prior to her appointment to Eurojust, she was Appeal Court Prosecutor at the dedicated office of the Tirana Appeal Court, where she was responsible for cases requiring Mutual Legal Assistance, in particular extradition requests.

The visit of the Albanian delegation and the deployment of the Liaison Prosecutor of Albania to Eurojust are supported by the EU-funded project Countering Serious Crime in the Western Balkans – IPA 2019. 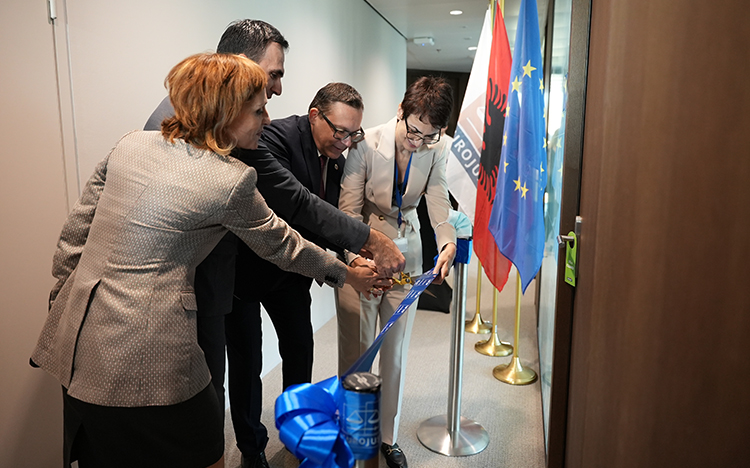