During the joint annual review of implementation of the Cooperation Agreement between Serbia and Eurojust  which was signed in 2019, the Chief State Prosecutor of the Republic of Serbia, Ms Dolovac, who led the negotiations and appointing of the Liaison Prosecutor, visited Eurojust Headquarters in late June 2021.

On this occasion, satisfaction with the cooperation was expressed by both sides, because of the significant increase of almost 63% of newly registered cases in 2020, since Serbia has seconded a full-time Liaison Prosecutor to Eurojust – Ms Gordana Janićijević, in March 2020. As reported by Eurojust, despite the COVID-19 pandemic, a total of 65 new cases originating from or concerning Serbia were supported by Eurojust in 2020. This is an increase of 62.5%. In addition to that, in 2020, Serbia participated in ten coordination meetings and two coordination centres. 20 new cases concerning Serbia were registered in 2021.

As stated by the Eurojust President, Mr Ladislav Hamran, the added value of the project CSC WB lies on both the operational and the strategic level – in setting the stage for the agreement signing through various coordination meetings and operational support, but also in supporting national counterparts in adopting new laws on data protection in line with the EU Acquis.

Through current and previous phases of the CSC WB project, support was provided to negotiation and implementation of four Cooperation Agreements with Eurojust: Montenegro and North Macedonia, and Serbia and Albania. The expectation that by having the Liaison Prosecutors located in The Hague, the cooperation with EUROJUST would be increased has proven right, so other Western Balkans countries will receive further support by the CSC WB to strengthen cooperation with Eurojust and other EU agencies and networks.

“At this place I will use this unique opportunity to thank the project Countering Serious Crime in the Western Balkans – IPA 2019, to the project management and the teams for their valuable support through the entire journey of signing the Cooperation Agreement and establishment of the Office of the Liaison prosecutor in the Hague, “ – as stated by Ms Janićijević, the Liaison Prosecutor at Eurojust during the yearly assessment visit of the Chief State Prosecutor of Serbia Ms. Dolovac to Eurojust. 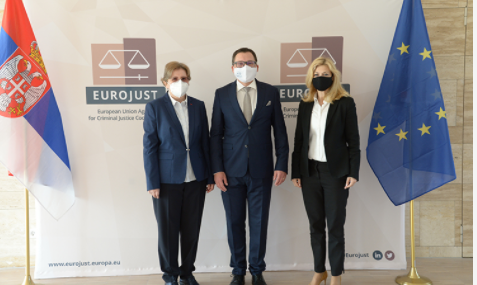